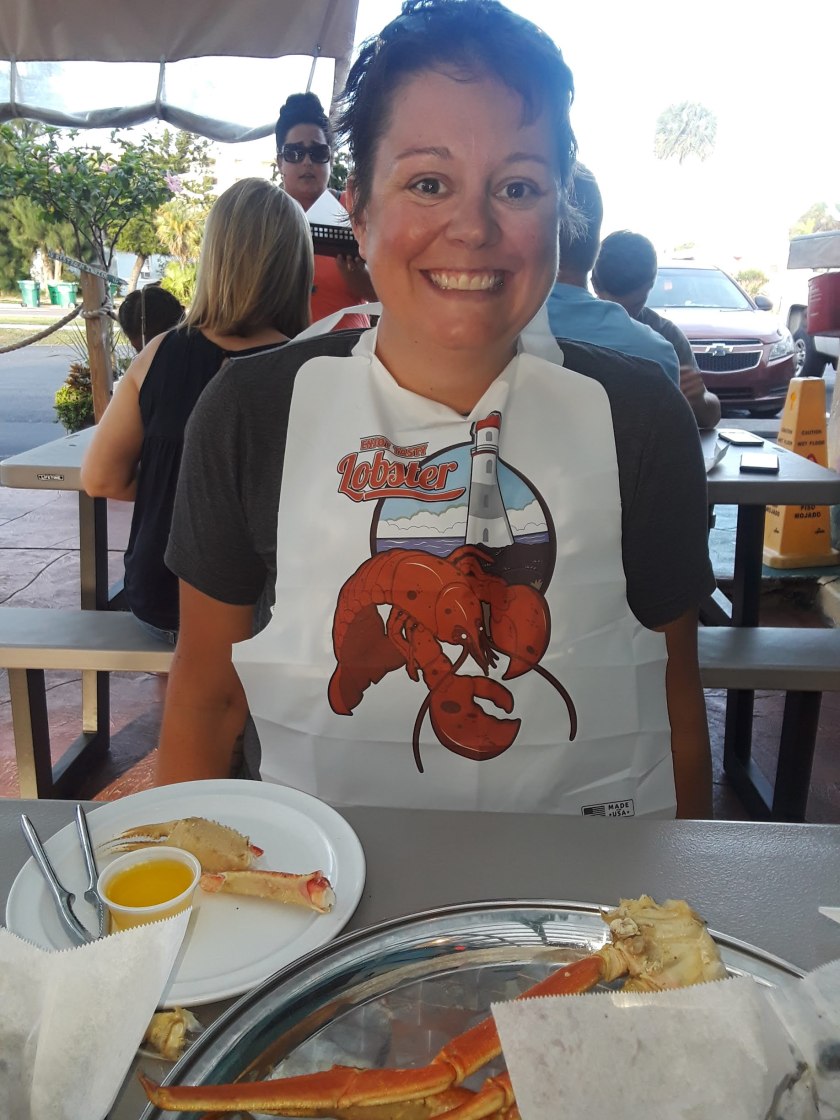 Flea Market Guy (FMG) and I went on our cruise. It was about a month ago. We left Knoxville and drove to Florida. We spent the night in a little beach motel that was probably 3 stars at best. I’ve always been a fan of cheap motels. Especially if they are right on the beach. Not that I would turn my nose up at a 5 star with crisp white linens. I love those kind of hotels. But, they aren’t a necessity especially when you are on a budget.

So we got to our little beach Motel, Anthony’s on the Beach. And it was. Right. On. The. Beach. I was immediately in love with it. Water for miles. Sand. Sunset. And sea turtle nests. Tons of them. FMG and I were hoping to see a mad dash for the water by dozens of baby sea turtles, but we were disappointed. All we saw were crabs. And quite a few of them. And they are pretty quick.

We got in right before sunset, so we took a nice long stroll on the beach and went and had dinner. I ate crab legs. And key lime pie. Because, when in Florida, right? Then we went back to the beach for another little stroll before bed. We got up super early to watch the sunrise. It was cloudy so there wasn’t much to see. So we got all of our stuff together, went to have breakfast and then went exploring near the port we were ultimately heading to.

We made it to the port and seamlessly got on board. Like I said yesterday, my bestie, Liz and her family were on the ship. She’s actually the reason we went. They were having a family reunion and she said, “you should come.” So I did. It was very last minute and unplanned, but totally worth it. I didn’t see her as much as I would have liked, but I guess that is the difference between traveling with kids and without kids. We didn’t have any kids with us.

FMG was awesome the whole trip. As I’ve mentioned, we are battling with his drinking problem. I was a little scared for him to come with me on the cruise because, honestly, I didn’t want his drinking to ruin it. Not that he is an embarrassing drunk or a mean drunk. He’s actually not your typical drunk at all, but there is still the hangover factor and I didn’t want our exploring to be ruined or not get to go explore at all because he was sick. But to my surprise and happiness, he didn’t over do it at all. We had the best time. He barely drank. I think I did more drinking than he did. We sang elevator karaoke, went to all the little nightly “game shows,” even participated in a couple of them. We got off the ship in Nassau and skipped all the tourist excursions, choosing instead, to explore by ourselves. We saw a 160 year old cathedral. Met the priest who was over it. I think he said he was the first black priest at that cathedral. All the others had been Europeans. So we basically met history. We walked through neighborhoods from poor to pretty well off. We met some of the locals, ate conch, which I was not a huge fan of, went to an old fort and took a self guided tour. We did go sit on the beach for a few minutes, but it was super hot and humid and we had already walked about 9 miles, so we took the last little walk back to the port and smuggled some rum and vodka on in my pants (don’t judge me, I said we were on a budget).

We went back to the room and relaxed for about 30 minutes before heading to the pool to cool off. It wasn’t that cool. And it was a salt water pool which shouldn’t have surprised me as much as it did. At first I thought maybe I had been sweating so much that I could taste the sweat on my lips, but then my eyes started burning just a little and I realized that I am an idiot and the pool was a salt water pool. There were no more surprises after that.

Until later that night when we ran into a guy on the elevator playing the piano and singing. After the bootleg rum and vodka, we were in quite a karaoke mood. I bet we stayed on that elevator with him for at least an hour singing at the top of our lungs and sweating up a storm. Elevators get hot when they are packed and you are performing. I’d venture to say there is at least one YouTube video out there. If you find it, please forward me the link and also, I’m sorry.

After FMG finally was able to talk me into getting off the elevator we ended up at one of the random cruise game shows. All were very funny. We went to a few. At some point, we had dinner, but I should have written about it a month ago when it happened. It would have been way more entertaining.

The next day consisted of a nice relaxing day at Coco Cay. It’s basically Royal Caribbean’s privately owned beach. The perks of the cruise were included like unlimited delicious food, and drinks if you had the drink package, but you could also buy souvenirs and cabanas for the day if you wanted to. We just chilled out on the beach chairs and swam in the ocean for a while. At some point, I got a small case of sea itch. It’s basically a rash that usually occurs where your bathing suit is from murdering tiny little jellyfish embryos when you get out of the water and they release their toxins in your skin and likely, you have a reaction that is like a nice little red itchy rash that lasts from days to weeks. I was on the “to weeks” side of it. But in the end it was still totally worth it.

We headed back to the boat an hour or so before we really needed to, but someone from another cruise ship that was also there got left behind and although it was paradise, we didn’t want that to happen to us.

So we got back to our stateroom and sat on the balcony for a while watching people slowly filter back to the ship.

FMG was absolutely perfect the whole time. It was one of those surprising things about dating an alcoholic. Just when you think they are going to ruin your good time, they end up doing exactly what they said they were going to do.

I think I’ve been pretty open about the fact that FMG is a raging alcoholic. Not the angry drunk abusive kind. Just the self loathing, self destructive kind. But he did a complete 360 for me on this trip and I’m thankful for that. I wish I could say he stayed on that path upon our return, but he didn’t and that is a story for another day or ten.

When the cruise was over, we spent half of the day back in Florida and then we headed to Savannah to see some of their history and FMG wanted to take me to Tybee Island because I have a small fascination and love for lighthouses. So we took some pictures and walked through the random Monday night flea market that was going on there. He bought be a picture of a lighthouse.

We found a hotel outside of Savannah and hunkered down for the night. We both agreed that even if it was a cheap motel, we wanted a place that had white linens and not one of those lampshade looking red and yellow murder blankets on top of the bed. After we found one, we proceeded to ask the clerk if we could have the haunted room. Savannah got us to ghost hunting. She said she didn’t know of any. So FMG asked for a handicap room. He thought the likelihood of it being haunted was higher because maybe someone old had died in it. Morbid but true (probably why I love him so). Plus, the bathroom has a way bigger shower and easily fits two. So we got the handicap room, went and had dinner, showered, and went to bed. No ghosts were sighted.

We drove the rest of the way home still high on the smell of salt water, sand, and sunblock. We talked more about our future together and made plans to try living together and see where the future may take us. Along with searching for around the world cruises we could take (that actually exist).

Then we got back home to reality… I won’t ruin this happy ending today, I’ll save that for tomorrow.

Instead, I’ll post some pictures below of our trip. There aren’t as many as you’d expect, but we spent a lot of time in the moment and didn’t have our phones or camera with us.