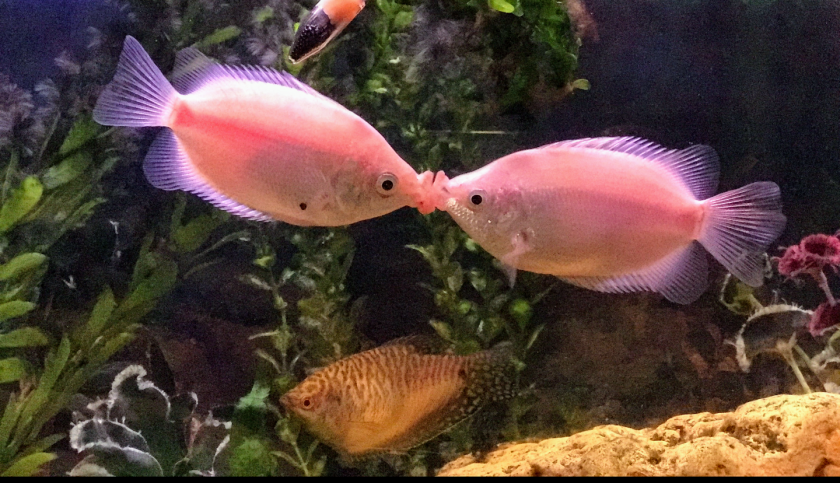 I am not what you would call an avid fish lover. Or even a good aquarium owner. I inherited a tank about 6 or 7 years ago. I got a bunch of fish that included some gouramis. As it turns out, gouramis are pretty hearty fish. I got two different kinds. One was a pink colored fish that likes to kiss the other pink fish in the tank. The others were grey and kind of striped. All the other fish I got for the tank ended up getting eaten or dying. Including the algae eater. I’m on my third one of those guys.

My point is, in my opinion, I’m not a great a fish owner. And gouramis are great fish for someone who is not “fish people.” I ended up giving the larger tank to my sister because she wanted it and I’m a giver. I downsized to a cute, square 30 gallon tank with half a lid. There is some space at the top where I just drop the food in the morning and again at night. My sister says I over feed the fish. She thinks they only need fed once every couple of days. But the fish are so used to me, I can literally put my fingers in the water and pet them. I know it’s weird, but they seem to like it and it amuses me.

However, it may have been to their detriment. The pink kissy fishes were the most lovable. They would come right up and let me pet them on their little slimy backs and they would do their little kissy faces on my finger which I thought was super cute.

Apparently, Luna, our cat, thinks that it is very cute, too, that the fish are not scared. She’s always on top of the aquarium pawing at the water and drinking out of the tank and just sleeping on top of it. I noticed the other day that two of my kissy fish are missing. There is only one left in the tank. I’ve determined that sweet, sweet, Luna has eaten them, but I haven’t been able to find any leftovers. I thought if a cat at the fish, it would be like a cartoon where the cat puts the fish in her mouth and pulls out just the bones. I haven’t seen any bones anywhere. Maybe she ate the whole thing and the rest is in the litter box. I don’t know. But I doubt they just packed their little fishy suitcases, jumped out and took off, even though, we have had enough rain they could have probably survived.

I have closed up the space where she is likely getting her snacks from. And I’ve tried to keep an eye on her whereabouts so she doesn’t eat the other 5 that are still alive. I think the algae eater is safe because he’s always at the bottom and I’m fairly certain she won’t go deep diving. But now I’m holding a grudge against her for eating my favorite fish. I’ve been told I don’t love them that much because I haven’t named them. But really, I’ve just named them all fish.

Anyway, now I have a nightly habit of counting all the fish because I don’t want to keep them if they are just going to be murdered by the cat. I’d rather give them to someone who isn’t going to eat them.