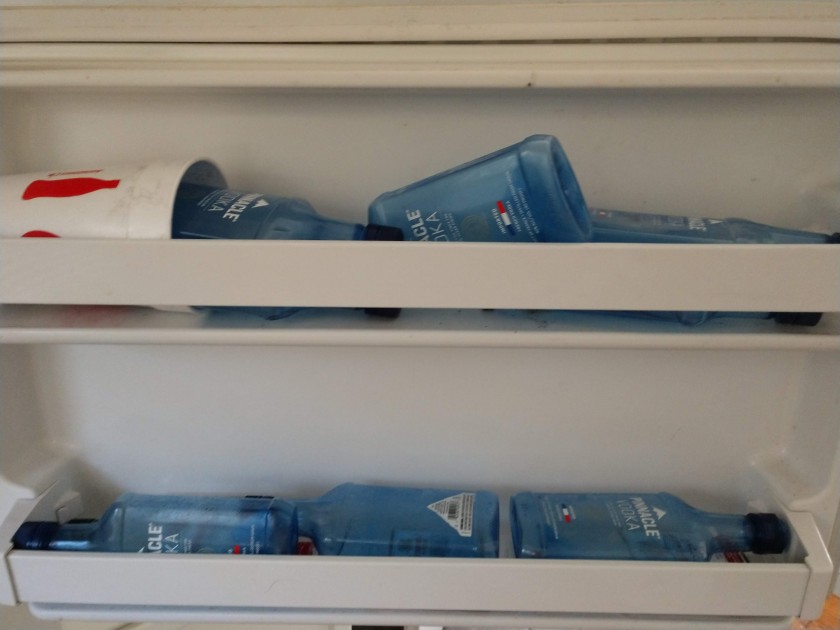 March 5, 2020 @rouletteweekend The Brother in Law Diaries Leave a comment

Things have been a little crazy here at Casa de RouletteWeekend. I haven’t really had much time for updating of any sort, mostly due to exhaustion and partly due to laziness if we are being honest. When last we met, FMG’s brother was in the hospital with liver failure. We were all worried he was going to die. He was green and confused.

Flea market guy and I went and cleaned out his brother’s apartment, which I may have mentioned in the last post.

When we first got to his apartment, before he took the long ride to the hospital, it looked like any other apartment. The porch was a little junked up but not any more than any other person who actually “lives” in a place. When brother came to the door, we caught a glimpse inside the place (which I may have mentioned in an earlier blog). It was pretty trashed. Way more than “lived in.” Mom (his not mine) pushed her way through the door to go use the bathroom and came back out without a word about the state of affairs inside.

Maybe it was his hulky green that made her prioritize what she would and would not be upset about at that moment, but she said nothing. After brother was settled in at the hospital, it was unanimously decided that he could never go back to that apartment. It was a very toxic environment all the way around. So the lease would be stopped and we’d move him out.

I think the idea of human connections has really lost its importance in today’s world. We all feel so “connected” because we can pick up our phones and see what’s happening on the other side of the world or in our friend’s lives when we want to keep up to date, but you can’t reach out and touch someone through your phone. You can’t hug someone. You can’t even have a real and meaningful conversation without actually being on the phone and talking.

Sure, words are nice, but you can’t hear tone and sarcasm and get the jokes the way they were meant most of the time when you are just social media socializing. I know I’m not saying anything that hasn’t been said a hundred times over. It was just super evident in brother-in-law’s apartment that even with all the social media in the world he was still all alone.

There was garbage everywhere. Literal garbage. Instead of putting it in a garbage can, there was stuff just shoved in cabinets or empty boxes put back in the freezer. There were dozens of coke cans. Some empty, some still had coke in it with a collection of cigarette butts. Clothes were scattered everywhere. The place hadn’t been dusted in who knows how long. And everywhere we turned, there were liquor bottles.

I found that to be the most interesting part since brother in law had just told the doctors at the hospital that drinking wasn’t really his thing.

So when I say that there were liquor bottles, I mean THERE WERE LIQUOR BOTTLES EVERYWHERE.

There were at least 2 dozen pints in the freezer. There were a dozen or more pints in the fridge. There were 1.75 liter bottles in the pantry along with dozens of pint bottles. All empty. That’s not counting the ones scattered in the living room and randomly hid in the closets and other cabinets. It was one of the saddest things I had seen.

If loneliness were a painting, that’s what it would look like. It’s true that suicide looks different for everyone. His looked very lonesome and agonizing. It took us 2.5 days to get the apartment cleaned out and almost move in ready for the next guy who decides to drink himself to death in a tiny Tennessee town in a tiny Tennessee apartment.

It took no less than 30 large black trash bags to get all of the garbage out. We washed what clothes we could wash and dry in the time we were at the apartment. We debated throwing the rest of it away because, let’s be honest, dead men only really need one good outfit. But we were trying to stay positive and FMG was really upset that we were cleaning out his brother’s life.

When people are dying, the living start to feel regret in record time.

Room by room we threw away vodka bottles, coke cans, cigarette butts and empty food containers. It was a very sad couple of days. Even the cobwebs were sad and black like they didn’t want to live there either.

After day 3 was over and we had moved everything into FMG’s storage unit, the keys were turned in and brother-in-law was officially homeless or living in a hospital, depending on your perspective.

It made me remember when FMG was in the depths of his drinking and I would go to his house and the dishes would be piled up and the garbage would be overflowing the trash can (he did, at least, clean up after himself some). His laundry would be clean but it would still be in a pile on the floor. The litter box would be weeks untouched. And I’d go in like a hurricane while he was at work and clean until I was sweating, trying to replace all the negativity with something positive. And FMG would come home from work and he would see how clean his apartment was and he’d be thankful and he’d feel so much better and then he’d slowly unpack the fireball from the brown paper bag and start drinking. And as much as I thought cleaning would help clear his mind a little bit, I always felt like I failed.

Until I saw brother-in-laws apartment. He had lived there for 2 years and nobody was checking on him. Nobody was coming in like a hurricane and attempting to get rid of some of the negativity. And it was jarring just how depressed a person could be and still try to live. Not that he was trying very hard, but somehow he still managed to throw a pizza in the oven every now and then and wash his clothes on occasion. The burn marks on the hardwood floor told the tale of a lucky, lucky man who should have died engulfed in flames a long time before his liver failed. But he was still alive. Even if he wasn’t living.

Check on your people. Even if you don’t agree with how they are living. Even if you feel like nothing you can do will help. Check on your people because doing nothing definitely doesn’t help. Luckily FMG didn’t have to say goodbye to his brother. We aren’t planning a funeral and FMG still has time to say all the things he thought he wasn’t going to get to. And that is a gift.