Happy Humpday. I know I was supposed to tell you all about Vegas yesterday but life got in the way. Mel had a doctor’s appointment for his broken wrist. So by time you are reading this he will either be in surgery or home from surgery. I’ll tell you all about that tomorrow.

I went to Vegas last week. I meant to write about it but, like I said the other day, winter is taking its toll on me, but thanks to a little kindness from a friend, I’m feeling much better  and wanted to share with you the amazing day trip I took while in Vegas.

My friend, Maranda, and I decided that Vegas was the spot for her 29th again birthday (that’s what women call it when they don’t want to say 40). So we took a red eye to Vegas on Friday. And by red eye, I mean we bought tickets on Allegiant six weeks in advance to get a good deal on flights. I love flying Allegiant out of Knoxville. Usually when I hop on a plane, it’s to go to Florida. But I made an exception this year because I’d never been to Vegas and when one of your BFF’s say that’s where she wants to go, well, you just go.

So Maranda wanted to take a day trip to The Grand Canyon. I wasn’t opposed to it, but it was four and a half hours to get there and I didn’t really want to spend the whole day driving and into the night driving. Although, I would have loved to see the Grand Canyon (it’s on our list for next time), we opted out of it.

When we got into Vegas, we asked our Uber driver what a couple must see places were. He rattled off a list and I took notes. Before I left, my brother Greg told me that I haven’t lived life until I’d rented a convertible and drove it across the desert. So he planted the seed.

Maranda and I enjoyed our Friday night. Although we didn’t drink all the way there and stay up all night gambling and hitting on random people. What we actually did was walk the strip like homeless prostitutes exploring all the wonders of Vegas on a mission for the Apothecary (that’s where they sell the legal weed!).  We found it!! And I highly recommend them. They were professional, courteous, and knew exactly what we (I) needed…. 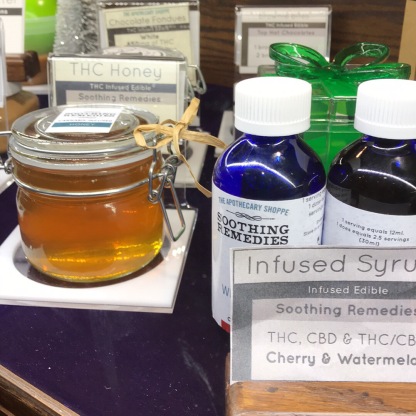 THC Infused Honey (that I didn’t get, but wanted to).

THC Infused Cake pops that I got and thoroughly enjoyed!

After the dispensary, we went across the street to the casino because I was starving and we hadn’t really gambled, except for black jack which we lost our asses in. So we went to the cheap casino since we were obviously in the less traveled part of Vegas and things were more affordable (even the drinks). Then we hopped on a bus back to the bustling part of Vegas where our hotel was (and the expensive drinks).

So we did more of the Vegas-y things Friday and Saturday. A little gambling. A little eating. A little getting harassed by people trying to sell you everything under the sun plus a time share. And we took in a show. Blue Man Group. And it was awesome.

Here’s a little secret that I did not know about renting a car: If you fly into a place and you are planning on flying out of that place, you can rent a car with your bank card without the ridiculously high deposit. It’s a good secret to know.

We had a route planned, but when we got the car, we changed things up a bit remembering what our first Uber driver told us. He said we needed to start at Red Rock early in the morning before it got too hot. And so we did…. 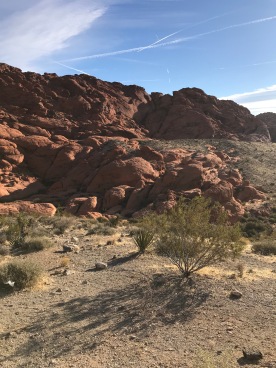 It was a little windy

After we drove there, we had no cell signal to tell us where to go. We had planned for that when we planned our trip. I had taken screenshots of the directions just in case that happened, but then I went and changed the order of the destinations thus negating the use of said maps. So we took a guess on which way to go and luckily we were not wrong. Eventually Waze started working again and we were back on track. We drove an hour or so to get to Valley of Fire. It was kind of like Red Rock only shorter from beginning to end, I think. Oh, we did have to pay at both places to drive through. They are National Parks and Conservatories after all, but it was only $10 at one place and I think $7 at the other. That’s for the car not per person.

When we got to that park, the ranger (the guy who took our money) told us when we got to the end we would be almost at the third stop on our list. Lake Mead. It’s a huge man-made lake that we didn’t get to go off the beaten path to see because the beaten path was closed for repairs or something, but we still got to see it.

It was a long, long road to get to Hoover Dam. Sixty miles to be exact. Every so often there were toilets along the way. Little concrete buildings with a port-o-john type toilet. Either a plastic or metal toilet with no water and no way to flush. You just squatted over it and let ‘er loose. There was toilet paper and sometimes hand sanitizer. I didn’t take a pic of the toilet, but now I am regretting it. Only because you would understand why

And then we finally made it to Hoover Dam. It was really cool. You could stand on the state line between Nevada and Arizona which isn’t really a state line at all. It’s a bridge over not-so-troubled water, but it was impossible to have one foot in and one foot out without a 500+ foot drop or so. 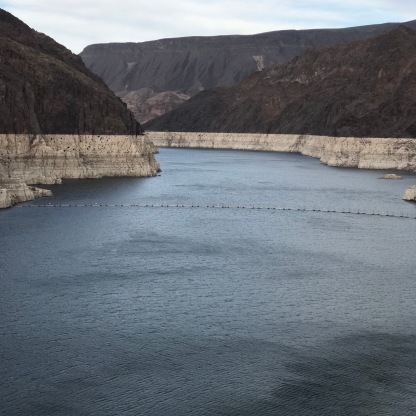 You can see where the water spends a lot of its time. 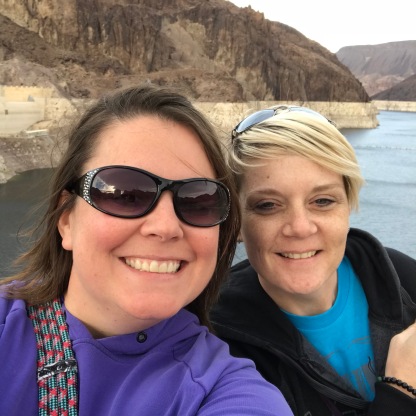 Me and Maranda at the Dam. Despite what her eyes say she did NOT buy a vape pen at the Apothecary.

I think my favorite part of the going to the Dam was seeing the story of The Hoover Dam dog, who I named Buddy. He was the mascot of the Hoover Dam. He was a stray who stayed around and kept the workers company. They said although he didn’t own the dam, he sure walked around like he did. One night he “fell asleep under a truck and was run over by the driver who did not see him. Grown men wept as they jack-hammered a tomb for him in the rock next to the temporary ranger station.” He’s still there in his grave keeping an eye on things.

He’s still watching over the dam.

So we left the dam and headed back to Vegas to catch Cirque Du Soleil, which by the way was fabulous. We had dinner. Watched the show. Went to Fremont Street, which was also fabulous. And then we went back to our hotel and went to bed because we had to be up at the butt crack of dawn to catch a plane back home. And so it was.