Originally, I was looking for a Honda. I have had more than one and I find them to be reliable and usually pretty, but because they are so reliable and pretty they hold their value really well and I had a budget I wanted to stay under.

After visiting 4 or 5 dealers in Morristown, TN, visiting at least 5 in Knoxville, talking to a few others local and a few out of state, I realized that most car salesmen have no clue what good customer service looks like. We would get transferred around to other sales people, they would flat out tell us, “I don’t know if we have one with a sunroof or not, I’d have to go out there and look” or “you can walk around until you find one and come let me know.” Most of them just flat out dropped the ball, in my opinion.

And just when I finally thought I’d give up and just air up the tires in my bike, I found a Mazda 3 on the Mazda of Knoxville website. I had just test driven a Mazda 3 from CarMax, but again, their customer service was so poor, I had to decide did I like driving the Mazda more than I disliked the customer service? And the answer was a resounding “no!” So I put in an offer on the Mazda 3 on Mazda of Knoxville’s website and filled out the credit app. I got the standard “we’ve received your app” text message and phone call and was told my name and number would be passed on to sales for them to call.

I got a phone call from a guy named William. Not a text like all the other ones. And he knew exactly what was going on. He knew I put in my credit app. He knew the car I wanted and I simply told him, to let me know what they needed from me so I could be approved and ready to drive away when I got there. I didn’t need a test drive, I just needed someone with a working knowledge of basic customer service. And William was it.

I think he called me about 6 different times on Friday requesting information and telling me what things needed to be sent over for my application. Once or twice he sent me a text, but it was for little stuff that needed a one word answer, not a phone call.

He called me back around 6pm Friday saying they had finally gotten my paperwork approved and finished. I thought it was going to take way longer since I’m self employed and that has a tendency to cause delays, but Mazda of Knoxville was hard at work to get everything pushed through.

We went Saturday morning and met William. I’m sure I don’t have to remind you, but we are still in a pandemic so going anywhere to meet people can be scary, unless you are one of those people who doesn’t care and thinks it’s a hoax. I’m not one of those people. I like having a mask on and I like for other people to have a mask on. William read the room. I think all the salespeople at Mazda of Knoxville were really good at reading their audience. There were people there looking at cars with no mask on and the salesperson they were talking to refrained from wearing a mask. Again, to me, it was just another sign of stellar customer service. Even if William thought that COVID-19 was not a big deal, he could tell by our actions of wearing a mask that we thought it was and so he put on a mask and gloves. He opened all the doors for us so we didn’t have to touch anything and before we went to the finance office to sign paperwork, he went in and sanitized the chairs and pens and desk we would be sitting at. When Oscar, the Manager of Mazda of Knoxville came to meet us, he immediately put his mask on, and when Jerich the finance guy brought us into his office, he too, had a mask on.

So basically, William and Mazda of Knoxville did in a day and a half what ten other car dealerships around town couldn’t do in a month. And I would have literally gone without a car before I would have bought from someone who just thought we’d buy any car just because we liked it regardless of the level of service they provided.

So thank you, William. (Hopefully this will get you a new customer and me a bag of coffee).

And thank you Mazda of Knoxville. It was a pleasure doing business with you!! 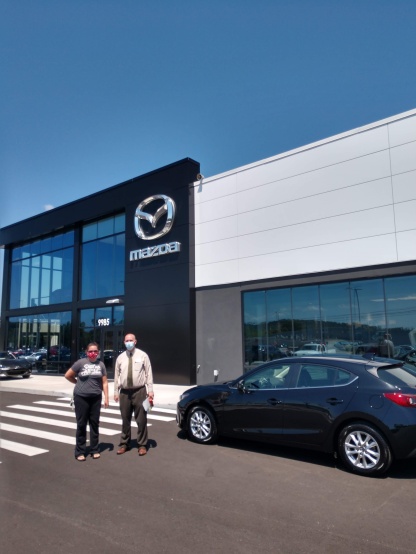 Me and William taking the obligatory “I bought a car” photo while social distancing, of course.

Me and William taking the obligatory “I bought a car” photo while social distancing, of course.

NOTE: Mazda of Knoxville has not endorsed this blog. It is just an honest gesture of appreciation for their top notch service.