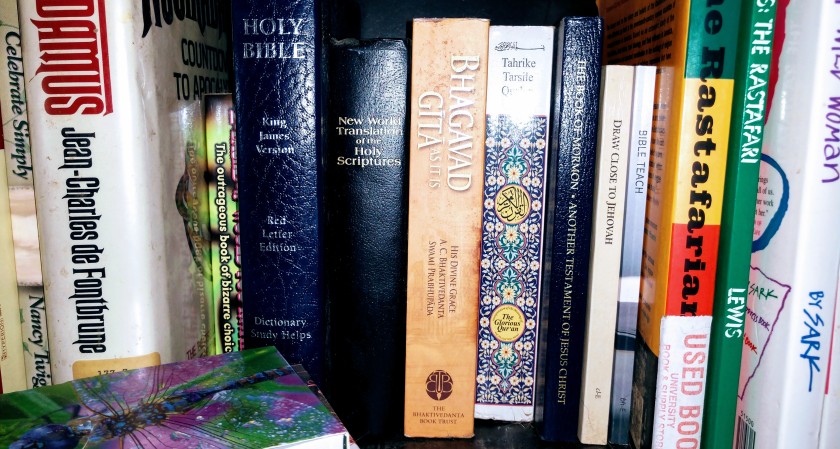 I love reading and I have pretty versatile reading habits. If it has words, I’ll give it a shot. I’m a little pickier when it comes to books that I actually purchase and keep forever, but if I’m checking something out at the library or reading something online, I’m not very picky. I do like a good romantic fiction. I like a good autobiography or biography. I like self-help books and inspirational books. When I went to the store the other day to get my little notebook to write my “schedule” in, I wandered over to the book section. I was at the Dollar Tree. Everything is a dollar. I could afford a new book. So I found a year-long book of inspiration. I picked it up and was going to get it, but when I opened it, each new day was a bible scripture to read before you read the little chapter. I’m always turned off by books that reference the bible.

Not because I don’t believe the bible has good stuff in it. I do. But I long ago abandoned religion for my own brand of spirituality. And it’s not because I’m not God fearing. I guess you could say that I am. And it’s not because I don’t believe in Jesus, because I believe in Him as much as I believe in Buddha, Muhammad, Haile Selassie I, and any other religious persons. I believe they all have a place in the world. What I have a hard time believing is that there is only one true religion and if I pick the wrong one, I’m going to hell forever.

I don’t like the idea of hell any more than I like the idea of being under that kind of pressure just to find peace. If there is one true religion, I’m fucked anyway if I pick the wrong one. So instead, I choose to take the best parts of all of them and put them to good use in my daily life.

Sure, I’m promiscuous at times and use terribly colorful language. According to some religions, that’s enough to send me to the fiery depths anyway. But I’m not going to stop saying fuck and I’m probably not going to stop doing “it.” Maybe I will. Anything could happen in a year, but for now, I’m not hurting anyone by doing either. Except myself according to Dani Johnson, but that’s another story…

My point is, I thought I wanted to leave God out of this 365 days of self-improvement, but maybe I just wanted to leave religion out of it. Either way, I was wrong. I don’t think I have it in my character to just disregard God, because I do believe in all forms of Him. God, Jah, Jehovah, Allah, the Great Spirit. I respect him in all forms and everything I do in my daily life is a direct reflection of my belief system that was built first by the Catholic Church and then by numerous religious studies courses and random books I’ve picked up over the years.

I can tell you that I’m not likely to become one of those people who beats you over the head with scripture in the next year and I don’t need anyone to beat me over the head with their beliefs that I have to pick and be saved and go to confession and not eat swine or any other random belief. I love all religions. I love learning about them. I think they are interesting.

I believe it’s important to be a good person. I believe there are repercussions to being evil. Do I believe that hell is some fiery place in the middle of the Earth or in some other world that you relive the worst times of your life over and over again while your skin burns off for eternity? Eh… not so much. Will I regret it if I’m wrong? Probably. But it’s a chance I’m willing to take.

What I do know is that I love learning about other people’s cultures and religions. I’m not likely to become a “devout” anything but my soul is content with my decisions.

So where is God in all this? I guess God will be right next to me or some higher power, whatever or whoever it may be. If you want to try to change my mind, I’m always up for a good cup of chai tea and some religious talk. But only if you leave your judgement at home.