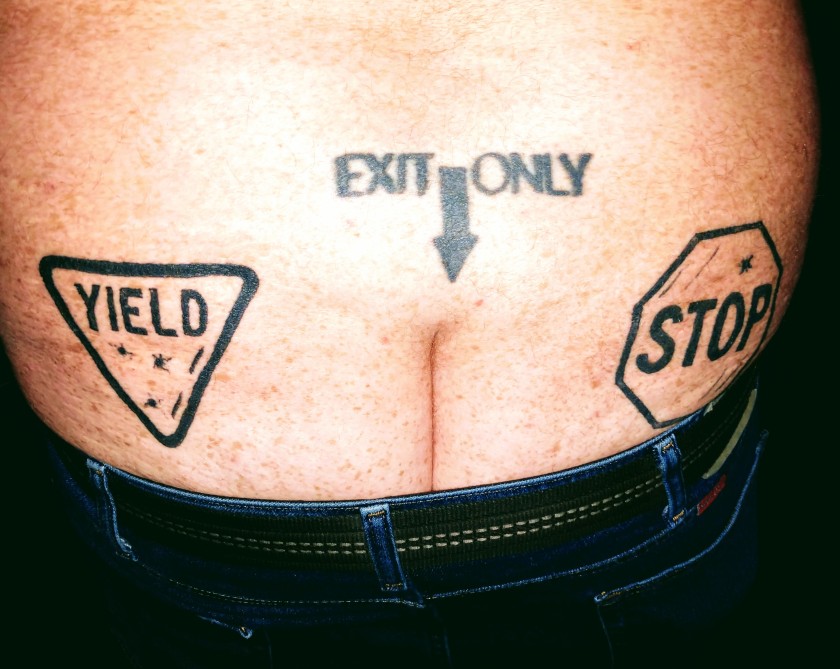 Sure, a tattooed ass crack is not what you want to see on a Sunday afternoon. And yet, here we are.

I went out to a country bar Friday night and for a little bit last night.

Friday night, I drank too much and stayed until they closed. They closed before 2am because the crowd wasn’t very big. I went to that particular bar because it’s very close to my house, I had never been there before, and I was hoping to meet a cowboy.

I have been thinking about a new book that I want to write and in my head, one of the characters is pretty country. So I just wanted to do some research. I thought I’d go to the bar and immediately meet a good-looking stud with all his teeth wearing a nice tight fitting pair of Levi’s and a cowboy hat.

I only saw one guy who fit that description and he was the married owner of the bar. I couldn’t very well ask him if I could come hang out with him for a few weeks at his place to see what life on the farm is like. Well, I guess I could have, but it would have been awkward.

People I did meet: The dancing queen and her daughter, a guy named Skeeter who wore a flannel shirt, and a ball cap. He kind of fit the description, but I don’t think he had any horses or cows. And I think he had a girlfriend. I met Exit Only. That’s the man whose ass you see up top. He, too, had all his teeth. He was your typical truck driver looking guy. Big dude, bald head, beard…he also had a wife, although he assured me she wouldn’t care if we had a fling. She could even watch.

Oh, and then there was Amanda. I didn’t actually meet her and that’s not really her name. But in my head it was. And it was definitely Amanda, not Mandy because she thinks all Mandy’s are stupid. She was shit-faced drunk by the time I got there around 8pm. Apparently, she was nursing a broken heart that Golden Boy gave her by loving and leaving her. Her friends tried to feed her so they could sober her up some, but she insisted she was on a diet and was not eating carbs. Even though she had no problem drinking them. She later threw up on the table and in a garbage can before being escorted out of the building.

And then there was Golden Boy. Apparently, he had a two-foot-long golden dick that he had been told repeatedly to “only put in the tip” because Mandy was not the first girl to go crazy over him. In his defense, he was pretty darn good looking. And seemingly a pretty nice dude. And if you add to it the fact of his mythical prowess in bed, then maybe there is a valid reason for semi-sane women to go loco. I don’t know. I didn’t actually find out what was in his pants. I went home and nursed a hangover most of Saturday.

But I did attempt to go back to the honky-tonk on Saturday night. The bartender assured me that it would be much busier and filled with single men. I should have specified cowboys. Or farmers. I only stayed an hour or so before I was bored. The band wasn’t that good. I didn’t want to really drink because I can’t really handle two nights in a row of being drunk. I’m older now. So I ended up going home and going to bed way too early on a Saturday night.

I’m thinking there has got to be a better way to find a farmer or a cowboy. I guess there’s always farmersonly.com or some other dating site. Then again, maybe I will just look on craigslist for a farm looking for people to come work. I guess it doesn’t matter if the cowboy or farmer I find is single or not. I’m just trying to do some field research anyway.

So if you see me living on a farm in the middle of June, you’ll know why. I’m writing a book.

And if you see me posting pictures from random hole in the wall country bars, well, that may just be because I kind of like the people at the honky tonks.