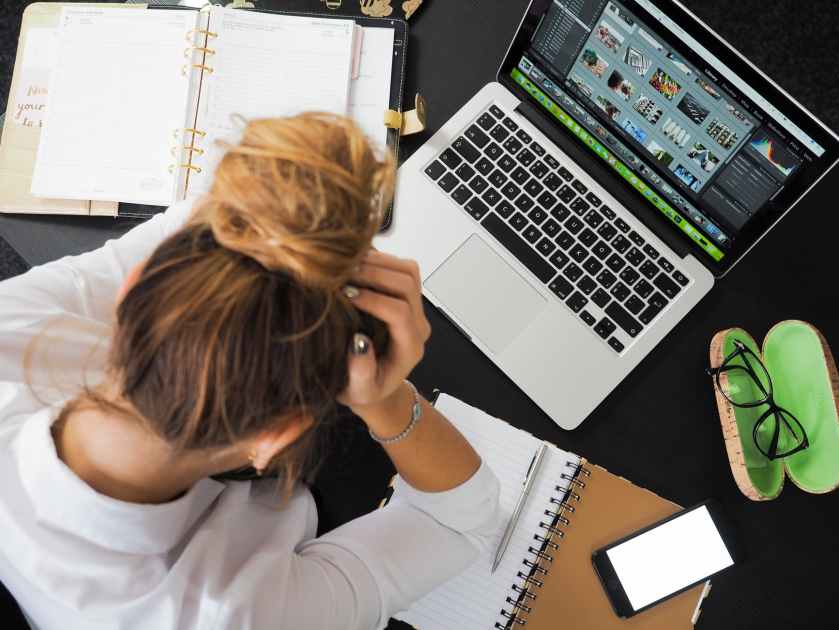 I cried today. At work. I’m not usually a perfectionist. At least not in my own life, but when I work for someone else, I feel like I always need to be going at 110% and I feel like I can’t fuck up. And I’m usually not terribly emotional.  But at work, if I do fuck up, I always feel like it’s the end of the world or that it can’t be fixed. Today was one of those days. I’ve been trying so hard at this new job to keep all the balls in the air and it just seemed like the last few days they’ve all been in the floor or in my lap. My bosses say I’m doing fine. So I guess I am. But they are just really great humans. And I’m sure if I wasn’t doing fine, they would tell me, but with most things, I’m harder on myself than anyone else could ever be. Young boss said, “take a deep breath,” at least a dozen times today. “You’re doing great.” Reassurances don’t really help when you’re in the middle of a small anxiety attack. I think the last time I was overwhelmed at a job was at the granite shop. I was always overwhelmed there, but I thought that was because I was emotionally and verbally abused on a daily basis. But maybe it was just because I feel like I have to be perfect and make things run perfectly or I’m not doing my job, the thing I get paid to do, and I deserve to be fired. Like I said, I’m harder on myself than anyone else will ever be. Either way, I made it through the day without incident. I even felt better by time I left because like I said, the owners are just good humans. But still, I went to my neighborhood bar and had a beer. Then I came home and had another. And then one more. And now I’m about to take what’s left and carry it around the corner to my unboyfriend’s house where I will finish off the last 2 Angry Orchards (I know, the hard stuff) or a couple shots of tequila and then go to bed after watching some random movie that he will no doubt ruin by telling me the ending. And it’s fine. It doesn’t even bother me. And I guess it shouldn’t because I ask what’s going to happen. He’s not a “you really want me to tell you?” kind of guy. He’s a “if don’t want to know, don’t ask” kind of guy. So in his defense, I know what I’m getting myself into when I ask. It’s like one of those memes that say “insanity is doing the same thing over and over again and expecting a different result.” I always think one day, maybe he won’t tell me. Just like I always think, one day, he will remember my birthday or take me out on a date and it won’t always be 9:30 movies and 11:30 sex and 4:30 alarm clocks. But would I really want that if I had it? Isn’t that what life is really all about… wanting what you can’t have until you get it and then you realize it wasn’t what you wanted at all and you really preferred it the way it was but you can’t go back there because you already ruined it with what you thought you wanted? So instead, I just tell myself that I really prefer it the way it is. Predictable. No surprises. Comfortable. Easy.

It’s quite perfect really. At least I don’t have to deal with lying. Or disappointment with him. We’ve been doing this “thing” for so long now, our text messages are more like psychic readings.

They used to be long and drawn out to get to the point of “do you want to come over?” Today’s looked like this:

Him: What u doin

Him: whoa this early? leaving the gym

Simple. Easy. No fuss. No looking pretty. No planning and them him flaking out on me and giving me some lame ass excuse about losing his phone. No promises. No expectations. No heartbreak. I don’t even have to reply if I don’t feel like it. Hell, I don’t even have to shave my legs if I don’t want to. He doesn’t care. He just takes me as I am. I guess that’s the payment for me giving him the same exact thing. I just take him as he is tequila drinking, cigarette smoking, snoring hermit. But sometimes, you just have to go with what works despite how different you wish your life was.

Man, that tangent jumped about ten miles off base. Welcome to my brain. On another note, didn’t talk to bumble guy much today. We are still on for Saturday. I have a good feeling about him. Who knows, maybe I’ll even give up unboyfriend one day.